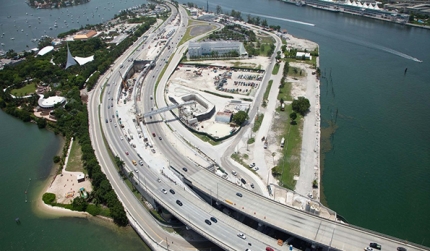 The Port of Miami Tunnel (POMT) was built to ease traffic congestion to and from the Port of Miami (POM), US. The port’s surroundings witness daily traffic of approximately 16,000 vehicles, which is restricting its ability to grow. Increasing congestion is also preventing the development of Miami’s central business district.

Construction of a road tunnel through Miami’s Watson Island was selected as the best alternative meeting all federal standards. The POMT project was integrated into the much larger SR-836 and I-395 operational improvement programme. The new tunnel links Watson Island’s SR A1A/MacArthur Causeway and Miami port on Dodge Island.

Financial closure for the $1bn project was reached in October 2009, with construction starting in May 2010. The project was carried out through a public-private partnership (PPP) between the Florida Department of Transportation and Miami Access Tunnel (MAT). MAT was responsible for the design, construction, financing, operation and maintenance (DBFOM) of the tunnel during a 35-year concession period.

Proposals for the construction of a tunnel connecting the Port of Miami and Watson Island were floated in the early 1980s. In February 2006, the US Federal Department of Transportation (FDOT) floated tenders, inviting request for qualifications (RFQ) from potential bidders. The qualifiers were shortlisted by the FDOT in April 2006 and an economic impact statement was formulated by September 2006.

In March 2007, the FDOT received request for proposals (RFP) for the project’s design and construction from FCC Construction, MAT and Miami Mobility Group.

MAT was created to execute the project. In October 2009, the FDOT achieved financial closure of the project with the help of Bouygues Travaux Publics and Meridiam Infrastructure Finance, which hold equities of 90% and 10% respectively in MAT.

The POMT project stretches between I-395, situated at the west end of MacArthur Causeway Bridge and the port’s roadway system on Dodge Island.

The tunnel boring operation took place 120ft under the channel bottom so that normal port operations were unaffected. According to the Port of Miami Economic Impact Study conducted in 2007, the project would provide 176,000 jobs and generate $17bn of economic activity.